A moment in time--less than a second—can change your life forever. You’re in a car wreck and lose a loved one. You discover drugs in your child’s belongings. Your boss brings you in and you realize that you’re about to be let go. Or it could be something really good: You realize, for the first time, that you’re in love with the person you’re dating, and want to marry them. You witness the birth of your first child. The importance of something that happens to you, a momentous occasion, might be measured between the seconds on a clock and still turn a corner for you.

Salvation, placing your trust in Christ, is like that. It might only take a moment, but it changes everything for you. On the outside, nothing has changed, but “behind the scenes”—in the spiritual realm, everything has changed. Forever. What exactly happens?

We’re going to discuss some of that today. If this is old hat for you, then I apologize if you’re bored. But quite frankly I feel sorry for you. If this doesn’t still excite you a little bit, then maybe familiarity has bred contempt, and you need a refreshing from the Spirit. Maybe like David, you need to ask God to restore to you the joy of his salvation.

First (and this is in no particular order) you’re adopted into God’s family. You’re born again. I know that this phrase is overused sometimes, but that doesn’t make it any less true. By birth all of us are born as children of Adam, and unfortunately we inherit some not-so-nice things: A sinful nature and all that entails. We’re under God’s wrath, not because of what Adam did but because of what we do. But all that has changed. The Lord brings us into his family, and we get to call him “Father.” Actually the term Paul uses is “Abba.” It’s the easiest and earliest word for an infant to learn, and it’s slightly less formal than “Father.” It might be best translated as “Papa.” We’re now on intimate terms which we never had before. If you read the above passage from Romans 8, you’ll see what else that means--we’re an heir of the Father, and a co-heir with Christ.

Second, you’re justified before God. That’s a legal term, meaning declared “not guilty” in a court of law. All the children of Adam are under God’s wrath, and awaiting the carrying out of the sentence. But when a person trusts in Christ, he’s declared “not guilty.” The righteousness of Christ is applied to his “account” and (for lack of a better word) “makes up” for all we’ve done wrong.

But what about after I get saved? What about when I sin as a Christian? Please read the Hebrews passage again, slowly. Especially vs. 12. My favorite comic strip of all time is The Far Side by Gary Larson. Check this one out: 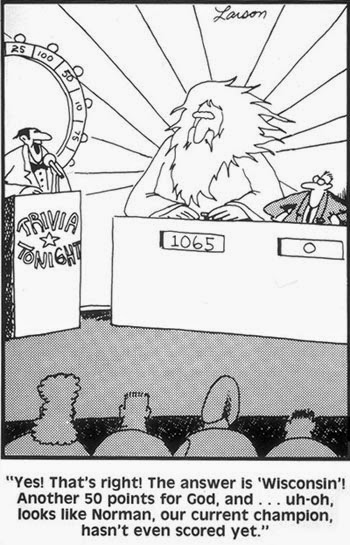 But there is one way in which Norman (or anyone else) could actually beat God on the scoreboard. If the announcer asked “So tell me, what sin did Keith commit on January 5, 2006?” God would have to respond “I can’t answer that one, Alex.” He promised that he's forgiven our wickedness, and will remember our sins no more. He will never, ever, ever bring them up again.

And now for the last point for today. When you received Christ, you were marked by the Holy Spirit. Imagine a pawn shop, and you want to buy something there, say a TV set. You’re not ready to buy it all at once, so you make a deposit on it. If someone else comes in and makes an offer on the TV, what will the shop owner tell him? “Sorry, that TV's been claimed by someone else.” And one day, you walk into the store, place the rest of the payment down and walk out with your property. Now, please don’t misunderstand. Jesus has already paid down everything for my salvation. He doesn’t “owe” anything more on me. But he hasn’t physically claimed me yet. Until he does, the Holy Spirit is his mark of ownership on me, and if the Enemy tries to make a counter-claim, then the Enemy is wasting his time. I belong to Christ, now and forever. You don’t look any different physically, but in the spiritual realm, “behind the scenes,” you're marked by the Almighty God as his child.

There’s a lot more that we could cover today, but that’s enough for now. I haven’t yet gotten into the most far-reaching aspect of this, something that a lot of Christians don’t know, or at least haven’t taken in. That’s for tomorrow.

Father, I am so blown away by what you’ve done for me. I deserve none of this. In fact, I deserve absolutely the opposite of it. “Thank you” seems so inadequate, doesn’t it? The only thing I can add to it, though, is “I belong to you.”

Someone might ask, "How can I share my faith in Christ with someone?" Here is one way (among many) that I've used. You can click here and even save the file if you'd like.

How To Understand the Bible in One Verse

I think that I can explain the main message of the Bible in one verse. Check this out: goo.gl/CFr7f5

If there's one thing I promote early and often, it's reading God's word. Not just the parts that happen to appeal to you, but all of it, from cover to cover. Paul says that All (not some, not most, but all) "Scripture is God-breathed and is useful for teaching, rebuking, correcting and training in righteousness, so that the servant of God may be thoroughly equipped for every good work." So how about a plan to do it?
I have 3 types of plans available: one year, two year, and three year. I personally prefer the 3-year one, since it works out to about a chapter a day. But whatever works for you! All the plans (in multiple formats) are available for download at the link below:
Bible plans
Ligonier Ministries also has a great list of plans

If you have a smart phone, you have NO excuse to not be exposed to God's word on a regular basis. Like the saying goes, "There's an app for that." YouVersion has an app for every platform (Apple, Android, etc.), and not only does it have just about every translation out there, most of them even have the capability of READING the Scripture to you, so you can listen to it anywhere. Check it out.